The Beyond Skyrim Wiki — Hosted by UESP
Jump to: navigation, search
< Iliac Bay:Factions 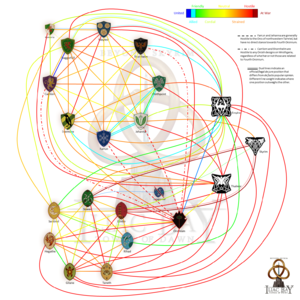 Alliances and conflicts between kingdoms

The kingdoms and major city states of High Rock and Hammerfell are constantly fighting amongst each other. The kingdoms are:

The Crown Totambus are the kingdoms traditionally dominated by the Crowns:

The Forebear republics are traditionally dominated by the Forebears:

Sentinel and its Sultanate are in a unique situation and belong to neither of the groups.

Other political entities that control land in Hammerfell are:

The Iliac Bay area is home to a large collection of Knightly Orders. Being a Bretic tradition, they are most commonly found in High Rock, altough certain areas of Hammerfell with Breton influences are known to have Knightly Orders as well.

Note that some knightly orders will be joinable, but not all, and that the ability to join certain orders may be dependent on choices made during quests.